Edward is a Blue Tender Engine!

Edward is a nice and caring engine. He is a mixed traffic engine; therefore he can pull both coaches and trucks. Due to his age, he can't pull long trains and can often strain himself.

Edward is based on the Furness Railways K2 "Larger Seagull" Class of 4-4-0's, designed by W.F. Pettigrew and Built by Sharp, Stewart and Company of Glasgow, Scotland. Overall, 8 of these locomotives were built, 6 in 1896, and an additional 2 built in 1900. Sadly, all were withdrawn by the early 1930's, and none survived into preservation.

Edward has a alterations compared to his basis, the most notable of which include the addition of a Fowler Tender, and an enclosed cab, compared to the open one on the prototype. 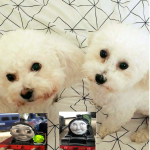